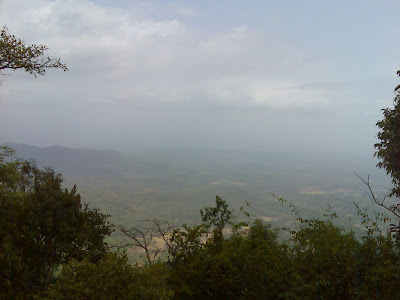 I captured this picture on my mobile handset on
the borders of Karnataka and Goa recently.
Friends,


For almost a month, I have not been able to write anything. I was out touring for my official business initially, and later with family and relatives. The rythm seemed to have broken. I have to pick it up again. I want to keep writing till the story leads to its conclusion. You conceive a story, think of a plot and start writing but thereafter, the story takes control of you and you have place yourself fully at its disposal. Sometimes I think it would have been better if I had started writing in my mother-tongue, Kannada. The difficuly of typing in Kannada script prevented me from doing so. It is indeed very difficult to capture the real regional culture and spirit in an alien language. I feel inadequate in my expression at times, and also feel that the work that so far I have done is lowbrow. But please bear with me. This is only a draft meant for friends and well-wishers to go through and make valuable suggestions. At the same time, I want it to reach those who have interest in literature, especially fiction, and their feedback will help me in correcting myself. Criticism, however harsh, if done without any spite, and with good intention will do nothing but good to the writer. That is why a Sanskrit poet once prayed "arasikeshu kavitva nivedanam sirasi ma likha".